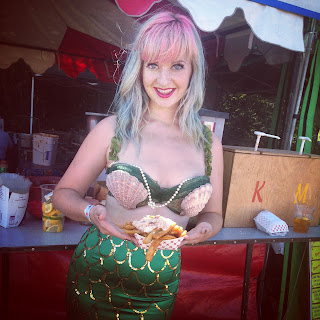 Tales of mermaids have been around for centuries. First stemming from the myth of Syrian goddess Atargatis who dove into a lake to take the form of a fish but her astounding beauty stopped her from fully transforming and her top half remained human. Stories of the  fantastic creatures appear in Greek myth as the enchanting sirens who lure sailors to their death on the rocky shores.
The mermaid became a part of European  lore with a spilt personality:Sometimes she is depicted as a beautiful, seductive maiden desired by lonely sailors and other times she is portrayed as a siren-esque beast waiting to drag men into the inky black depths on the sea.