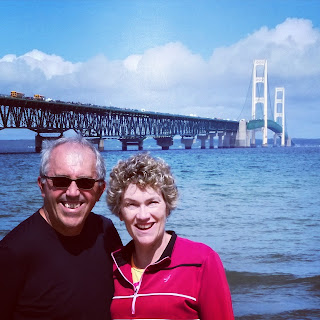 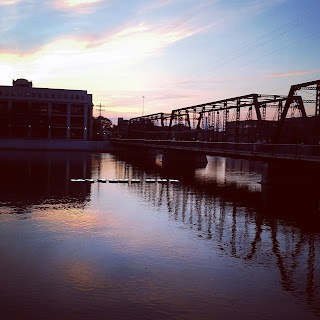 It is said that a person can not travel six miles in any given direction in Michigan without running into some form of water: river, inland lake, stream. This abundance of water leads to an abundance of bridges both large and small, old and new. The Mackinac Bridge is the world's 16th longest suspension bridge at 26,372 feet, spanning the Straits of Mackinac to connect the Upper and Lower peninsula of the U.S. state of Michigan. Affectionately nicked named the "Mighty Mac" or "Big Mac", the bridge was envisioned in the 1880s but it took decades to figure out logistics and construction struggles.  The Mighty Mac, designed by engineer David B. Steinman,  finally opened to traffic in 1957.
The Sixth Street Bridge in Grand Rapids Michigan, that now serves as anchor to My Your Our, was built in 1886 by the Massillon Bridge Company.The four span wrought iron bridge is the oldest and longest  metal truss bridge in the state of Michigan and is listed on the National Register of Historic Places.

These images were submitted by John F. in Mackinaw City, MI.