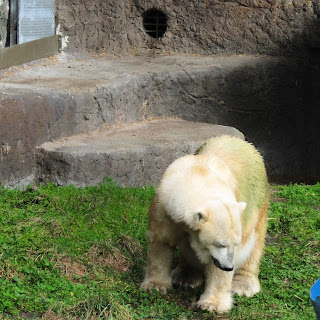 Polar Bears with out ice? While this guy happens to be chilling in the National Zoo sans ice, it's natural  icy habitat is warming up and quickly melting. Climate change is fast effecting the arctic Polar ice caps and having profound effects on the inhabitants of the regions.
If you would like to know more about the Polar Bear and climate change, click on the link to Polar Bears International

According to NASA "Over the past century, sea level has slowly been rising. This is in part due to the addition of water to the oceans through either the melting of or the "calving" off of icebergs from the world's land ice. Many individual mountain glaciers and ice caps are known to have been retreating, contributing to the rising sea levels. It is uncertain, however, whether the world's two major ice sheets-Greenland and Antarctica-have been growing or diminishing. This is of particular importance because of the huge size of these ice sheets, with their great potential for changing sea level. Together, Greenland and Antarctica contain about 75% of the world's fresh water, enough to raise sea level by over 75 meters, if all the ice were returned to the oceans."


This image was submitted by Grace E from Alexandria, Virginia.

My  Your  Our Water