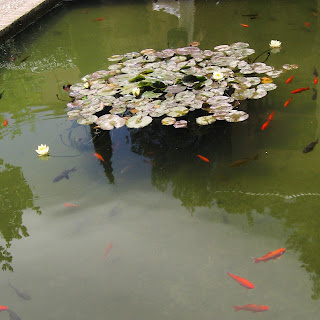 The term “koi” is derived from a Japanese word “nishikigoi”, which literally means brocaded carp. These include the ornamental varieties of common carp, which are used for decorative purposes in outside water gardens and koi ponds. However, “koi” is more of an English word and includes both brightly colored as well as dull, gray fish varieties. Koi, in Japanese, means love, affection or friendship. Hence, ‘koi’ are used as a symbol of love and good luck.

Koi are actually a mutated form of carp. Carp developed patches of colors such as white, red, and blue in their natural habitats in the Black, Caspian, and Aral seas in Asia, and China is the true beginning of Koi fish. According to Chinese history Confucius’s son was given a mutated carp by king Shoko of Ro and from then on the fish became the subject of much Chinese artwork. When the Chinese invaded Japan, these carp were breed as a food source due to their resilient nature, this was the beginning of the Japanese Koi fish.