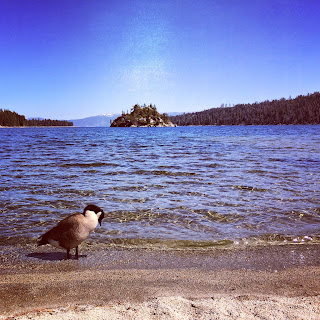 Fannette Island is the only island in Lake Tahoe and is located within Emerald Bay, on the California side of the lake. Fannette Island  is known as the home of Captain Dick "Them's my toes" Barter from 1863-1873. The eccentric captain had moved from England and built his own tomb and chapel on the island. He enjoyed sailing and earned his nickname from his penchant of showing his self-amputated toes to guests. Ironically, he was never interred in the chapel he built, as he was lost in a storm off Rubicon Point in 1873.

"A state park and a national natural landmark. It is the only island in Lake Tahoe. You can take a steamboat type ferry around the bay. There is a small mansion on the island that is rumored to have been built as a playhouse. This is a gorgeous area that should be on your lists of things to do if you are lucky enough to get to Tahoe."

This image was submitted  by Zack P of Visalia, California.