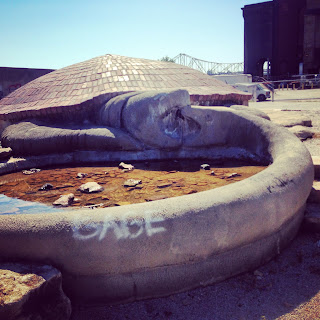 In Chinese culture, especially under the influence of Taoism, the tortoise is the symbol of heaven and earth, its shell is compared to the vaulted heaven and the underside to the flat disc of the earth. The tortoise was the hero of many ancient legends. It helped the First Chinese Emperor to tame the Yellow River, so Shang-di rewarded the animal with a life span of Ten Thousand Years. Thus the tortoise became a symbol for Long Life and as an immortal creature. In ancient beliefs there were no male tortoises and the female had to mate with a snake.


This sculpture is along the banks of the Mississippi in St. Louis Missouri.