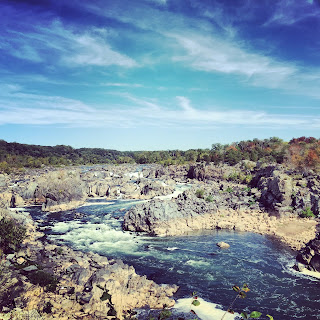 Great Falls National Park is located in McLean, Virginia, just a short distance outside of Washington DC.  It is at Great Falls that the Potomac River builds up great speed and force as it falls over a series of steep, jagged rocks and flows through the narrow Mather Gorge. At this point the river has such natural power that it is not a place for swimming, boating or any form of water recreation.
The history of this river is long and complicated as the river itself. It 1785 construction of a canal on the Potomac was started. The most demanding of engineering feats was the construction of a series of 5 locks that raised and lowered boats around the Great Falls. Thousands of boats locked through at the Great Falls carrying all forms of commerce upstream and downstream: whiskey, tobacco, iron, cloth, and firearms to name a few.
The cost of building the canal and maintaining proved too much for the Patowmack Company and they went bankrupt. The new owners, the Chesapeake and Ohio Canal Company abandoned the canal in 1830. In 1930 US congress authorized Great Falls as a park and in 1936 the National Park Service took over responsibility for its' management.


This image was sent by the 4th grade class at St. Louis Catholic School in Virginia.