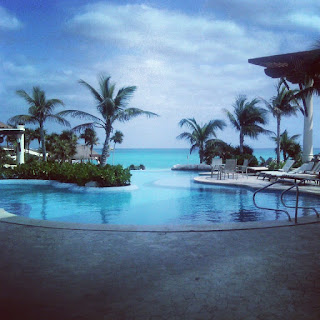 "Tulum  is the site of a Pre-Columbian Maya walled city serving as a major port for Cobá. The ruins are situated on 39 ft tall cliffs, along the east coast of the Yucatán Peninsula on the Caribbean Sea in the state of Quintana Roo, Mexico. Tulum was one of the last cities built and inhabited by the Maya; it was at its height between the 13th and 15th centuries and managed to survive about 70 years after the Spanish began occupying Mexico. Old World diseases brought by the Spanish settlers appear to have resulted in very high fatalities, disrupting the society and eventually causing the city to be abandoned.One of the best-preserved coastal Maya sites, Tulum is today a popular site for tourists."


" This spot, the water from the pool flowing into the horizon of the ocean, was an amazing sight to see every morning at breakfast."

This was submitted by Diane D. from Illinois.