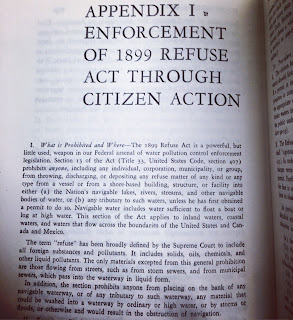 The Refuse Act is a United States federal statute governing use of waterways. The Act, a section of the Rivers and Harbors Act of 1899, prohibited "dumping of refuse" into navigable waters, except by permit. And yes, permits were granted. And yes,smaller non navigable waterways were not protected.
additions and changes to the Refuse Act have been made over the course of a century, most notably Federal Water Pollution Control Act Amendments of 1972,  amendatory legislation including the Clean Water Act of 1977 and the Water Quality Act of 1987.


My Your Our Water